We started out as an animation company initially and we now offer an extensive range of services, activities, projects and overall experience which extends into many other fields. Having responded to changes in technology and client needs and demands.

D fie foe productions has the capacity and capability to offer this range of services to you. We are always happy to discuss ideas and projects, however challenging. D fie foe enjoy capturing and tailoring work to clients needs’.

With a Theatre and Education background, having worked in both formal and interestingly informal settings, Simone is an experienced facilitator of projects with all ages from 2 – 92!

As Creative Collaborator Simone has had privilege of working with many artists, poets, dancers, and creative and techy people at the top of the game. Wide range creative planning, managerial and practical pre to post production film & media skills.

Managing multiple exciting, challenging and successful productions as Producer at d fie foe and more recently at Hippotrix, with a new area of research and time spent as Play Designer of apps. Always a smile and 100% commitment for every project whether setting up media education or an animated film sequence! 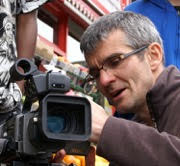 He has an intimate knowledge of traditional animation, live action and CGI, which he uses to produce cutting edge, cross artform work. He moves easily between creating large scale theatre work to the smaller delights of mobile devices like iPad.

His most noted commercial film work has been three acclaimed music videos for Orbital, one starring an animated Tilda Swinton (now with 2 million you tube hits), another featuring Roger Moore. However, his favourite is the sumptuous “Style”, which links all the best elements of animation, pixilation and puppetry together in Kafkaesque heaven.

In film education, he has led education projects with Macrobert, English National Opera and Scottish Ballet, and he facilitated seven films for London 2012 reflecting the lives of local children with an edgy reality. These were so well received, the films were screened at the Olympic handover celebrations.

As well as our own successful apps we have worked in collaboration with a number of children’s theatre companies to create companion apps for their shows. We also recently created the Virgin Money Fireworks App, for the Edinburgh International Festival, which went down a storm. This one is not just for kids – its quite magical to craft a firework display to music and watch it back. We were chuffed that @Virgin twitter thought it was “ruddy fantastic”.